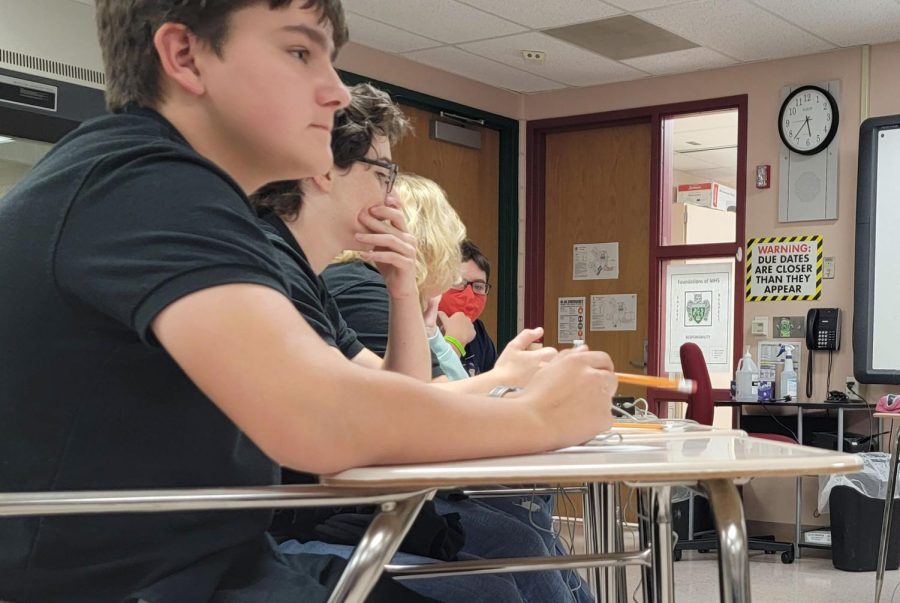 Freshmen Cooper Shobe and Levi Mies sit with their teammates during a round at the JV Scholars Bowl meet. The meet was on Thursday last week at Mulvane.

The Scholars Bowl team has several returning members from both the middle school and high school.

“[Scholars Bowl is a] fun thing to do in general,” freshman Cooper Shobe said. “[I] did it last year and the year before.”

This year, the season started off with two away games with varsity on Nov. 9 and JV on Nov. 11. For each meet, six students on the Scholars Bowl team piled up into the school suburban and headed on their way.

On Tuesday, the varsity team competed at Derby High School and ended the night 4-5. They didn’t make it out of pool play.

“We worked together pretty well; we just didn’t know any of it,” junior Colby Koster said.

On the day of the JV meet at Mulvane High School, the team also said they cooperated well.

“We won some, lost some, but we did better than last year,” freshman Adaline Pauly said. “I think we worked together pretty well.”

With a whole season ahead of them, the Scholars Bowl team members said they hope to continue to expand their knowledge for future meets.

[I joined Scholars Bowl] because I think it’s really fun, and it’s a good way to get involved,” Pauly said. “[I’m looking forward to] just having fun and answering lots of questions.”