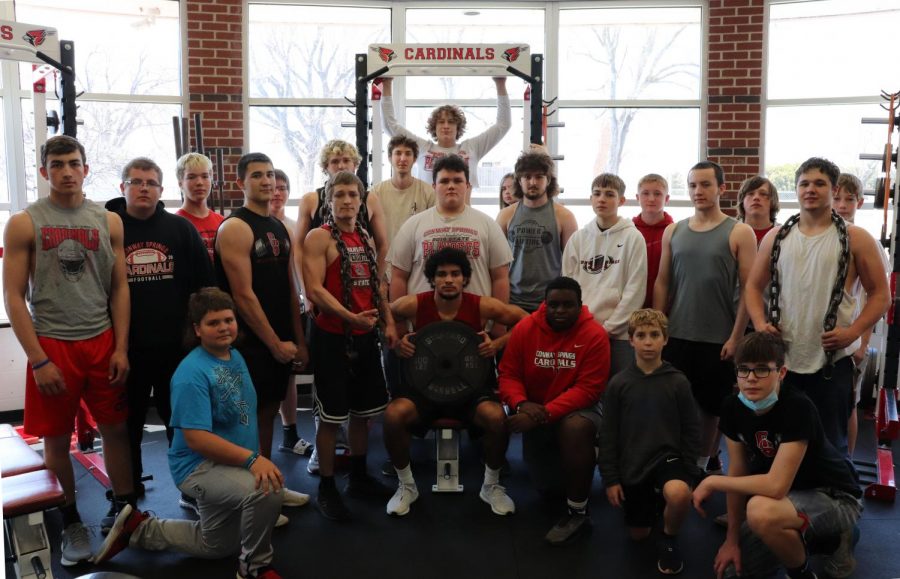 The CSHS men's division finished sixth overall and the junior men's finished second overall. No women represented Conway Springs competed in this meet due to conflicts with the Music Department’s Florida trip.

The spring semester brings a new sports season, including powerlifting. On Saturday, March 13, Conway Springs held an invitational meet. Conway has held this meet as well as State powerlifting annually, except when it was disturbed last year by the coronavirus. However, it was back this year with some changes; other than all participants and volunteers having to wear a mask, there was also no hospitality room or T-shirt table, no spectators were allowed and medals were given out at each station instead of at the end of the meet.

Students can either compete in the meet or receive community service hours by volunteering to work the meet in some way or another.

“I worked the meet because I needed community service hours and also because Mr. Biehler asked me to,” senior Brynn Andra said. “I’ve been working powerlifting meets since I was in like 8th grade so this was around my fifth year helping out. This year was stressful because there were a lot less volunteers than usual.”

While medals were still given out at the meet, it was less public.

“Getting the medals sucked. It was really confusing and for a second I didn’t even know where to go until I found Mr. Biehler,” said junior and second place overall winner Ian Solomon. “I wish we could have done it like normal, with the tables in the middle of the room after cleanup. It would have been easier and given more recognition.”

As for the other changes, such as wearing a mask, Solomon said he didn’t feel it changed the meet that much.

“I feel like there was less competition all around besides from Goddard,” he said. “Wearing the mask didn’t affect me, and I wore it the whole time even during my lifts. Some other people didn’t, but there were a lot of people there and I didn’t want to take a chance.”

Without spectators, the meet had a very different feeling for many of the competitors.

“The meet felt really different without my family or support system being there,” said freshman and first place overall winner in the junior division Brayden Kunz. “Still, I had a lot of confidence going into the meet and knew I could win it.”