Football games heat up for the Cardinals 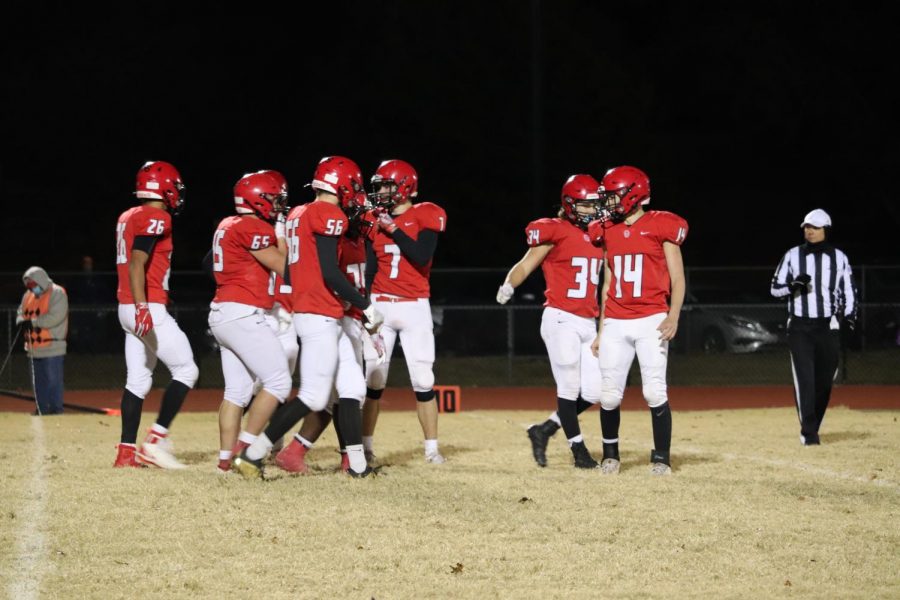 After a timeout, varsity football players meet on the field to prepare for their next play Nov. 13 during the sectionals game against Inman. The team ended up losing 6-46.

With the football season coming to an end, games became more intense for the football team. The intensity of the playoff games was evident when the Cardinals played against Plainville at their home field on Nov. 6. This game was the first game of regionals. The Cardinals took the game with a score of 14-7.

“I thought we all played well and everyone on the team was a big help near the end. The linemen were doing their work and I was following them,” senior Cole Schulte said. “I think if we execute our plays in the very beginning of our games, we will do very well in the upcoming ones.”

Despite the transition from middle school to high school play, the freshman and sophomores have shown their dedication to their performance in practice and in games and still enjoy the challenge of the sport.

“The activity and the friends I have are like family to me, and it teaches leadership,” sophomore Kutter Barnes said. “It feels good to be playing at a high school level because the intensity is what we football players play for.”

Since Plainville was a new team that Conway had to play due to the classification drop, the team had to adapt to their playing style in order to get a good lead.

“Plainville was such a big team, so we had to adjust our game plans,” head football coach Matt Biehler said. “We kept doing our jobs throughout the lines to wear them out during the second half. Our linemen played well, backs ran hard, and blocked well for each other. The final drive was very crucial because we had to score all of our points in the last 40 seconds. I’m proud of our team this season because we have great leadership out of our four captains. They make sure we are ready each and every week that have given us our good results this season.”