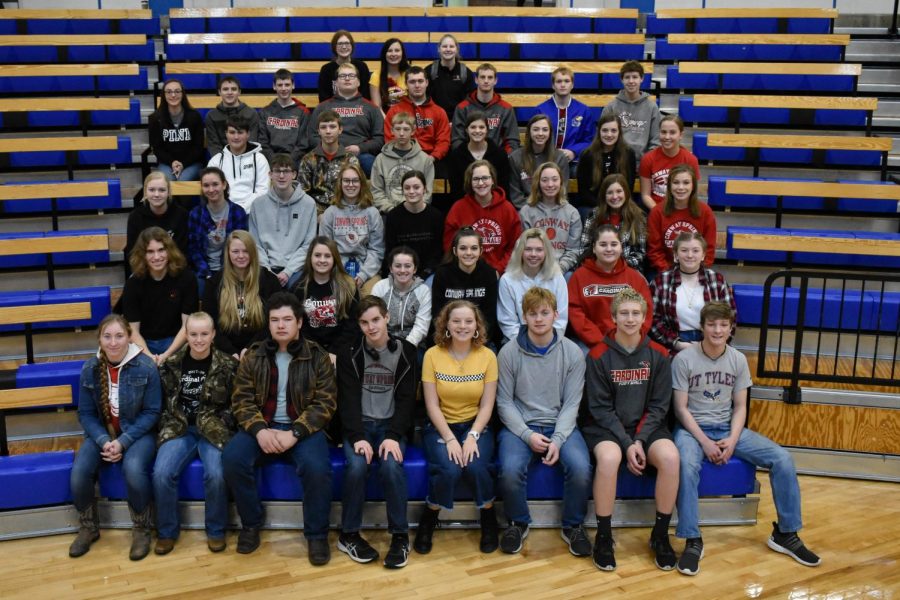 At the annual Pratt Academic Olympics, students representing Conway pose for a group picture. CSHS took 43 students to participate, and 13 of them ended up placing.

Per tradition, CSHS took 43 students to compete in the annual Pratt Academic Olympics Feb. 24. Students had different options as far as what they competed in and how they submitted their work.

Students who participated in this event had two different ways of competing. Depending on the event, students could either submit digital works ahead of time or compete on site. The events on-site involved either taking a test in the subject or performing their event. Students who competed by taking tests could not compete in the same event if they had already done that event in the past. Performances, however, could be repeated.

“It’s pretty chill. I like [performances] better than tests,” she said. “It was interesting to see people’s different perspectives.”

The Olympics took place over the course of three sessions. Students who were not competing during a session had various options to pass time. Each student was provided tickets for refreshments, and students had the opportunity to play pool, bust out a board game or visit the car show.

“I really enjoyed the games like the break room,” sophomore Lance Pauly said. “I won a game of pool and had fun.”

After students finished competing and returned to school, scores were quickly announced. Thirteen CSHS students placed in the top three in 14 different categories. Scores that stood out this year were senior Dawson Martin placing first in Current Events and  senior Adyson Koster placing second in the same event. This made Conway the top placer in that category. Senior Annette Berntsen placed third in both Sociology and Editorial writing, being the only Conway student to place in multiple categories. Senior Carson Clum placed first in Physics.

“I was a little shocked. I didn’t think I’d get first,” he said. “The test wasn’t hard, but I know other people usually do pretty well.”

Placers at Academic Olympics were: