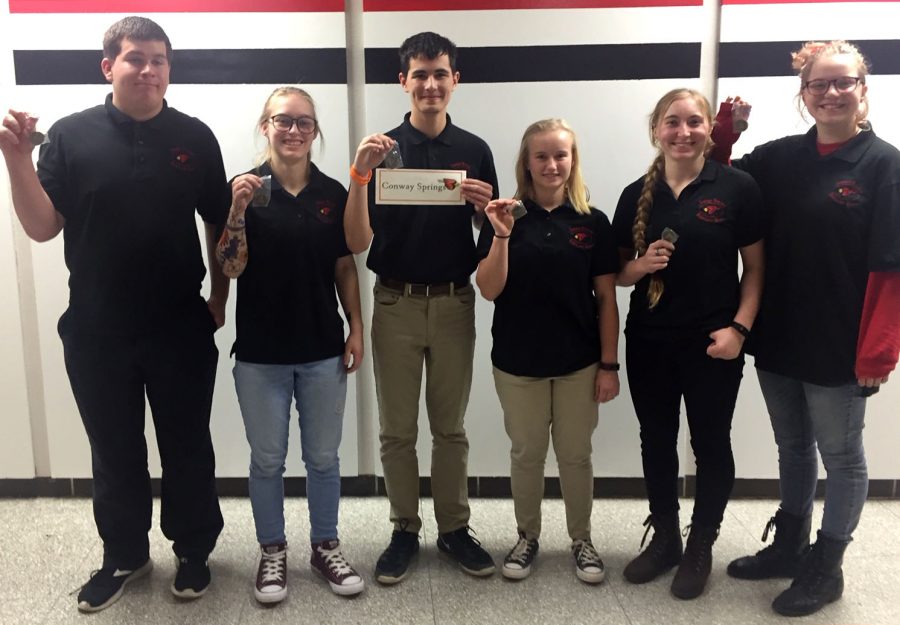 After competing at League, the varsity scholars bowl team poses for a picture with their medals. The team placed third at this meet, before moving on to compete at Regionals. Photo courtesy of Kristy Martin

On Feb. 1, a select group of Scholars Bowl members attended the annual Tournament of Champions at Bishop Carroll. Unlike other meets, the format of this tournament was different in deciding who played who due to the 40 teams who attended the meet. After a first round deciding the order of play, the team was placed in the third flight. Conway placed fourth in their flight of six teams. This was expected for some students, though, due to the larger teams they played.

“I wish we could’ve done better,” sponsor Kristy Martin said, “but it was good practice with a different format.”

Although most varsity members attended the tournament, a few did not go on to compete at Regionals, making this meet their last of the season. This was also the last tournament of some members’ high school career, one of these members being senior and captain Neal Zoglmann.

“Well, it was surreal knowing this my last Tournament of Champions, but I’m confident that next year’s team will do good at this meet,” he said.

After this meet, the varsity team went to Regionals on Feb. 6. Held in Bluestem, the meet consisted of 15 teams. Conway placed fourth overall, just barely missing the top three qualifying spots for State.

“I was accepting [of the results],” junior Lucy Boyles said. “It would have been cool to go on, but we did good.”