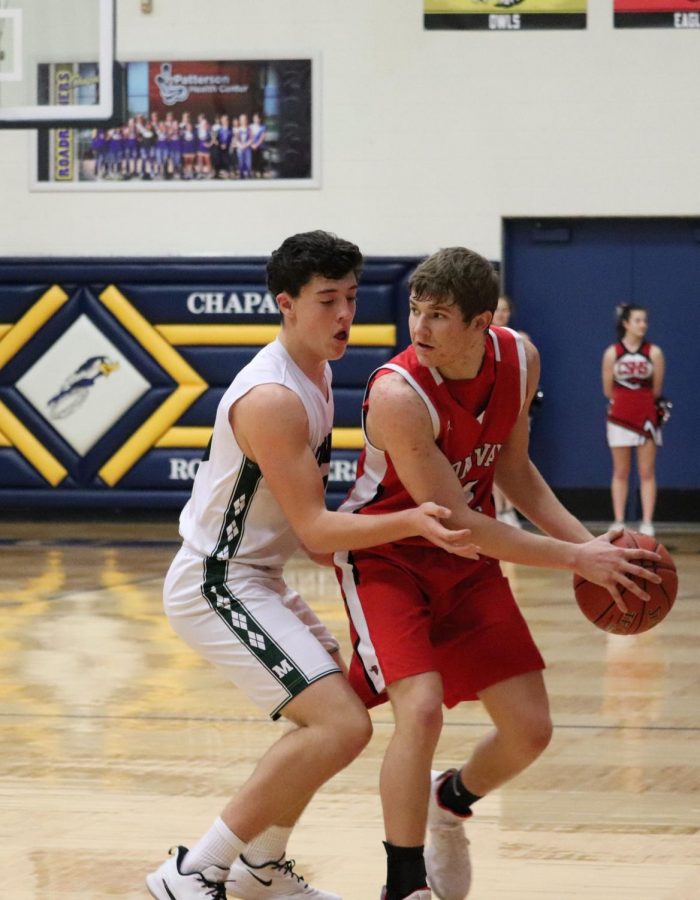 During the final game of the Chaparral tournament, junior Heath Hilger looks for an open player to pass the ball to. The boys placed sixth overall at the tournament after playing Clearwater, Sunrise Academy and Mulvane.

The boys basketball team travelled to Chaparral Jan. 23-25 to battle in the Roadrunner Classic Tournament. However, the team only had one win in their three total games played, which was a blow to their confidence after the win against Medicine Lodge earlier in the week.

The boys were hit with a crushing defeat during their first game against Clearwater with a score of 29-54. It wasn’t the start they were expecting.

“At first I thought we could hang on, but by the second half we lost our stride,” senior Peyton Winter said.

However, the team soon turned that loss around with a big win against Sunrise Academy, 50-30.

“It was our first win at Chaparral in two years,” junior Heath Hilger said. “That win helped give us the confidence to play Mulvane.”

This win was followed by another loss, though. The boys played Mulvane last, and left the tournament with a final score of 57-69.

Today, the team plays in Conway against the Trinity Academy Knights.

“We’re going to keep working in practice and work as hard as we can,” junior Jonathan Wright said, “and hopefully we’ll get a win.”