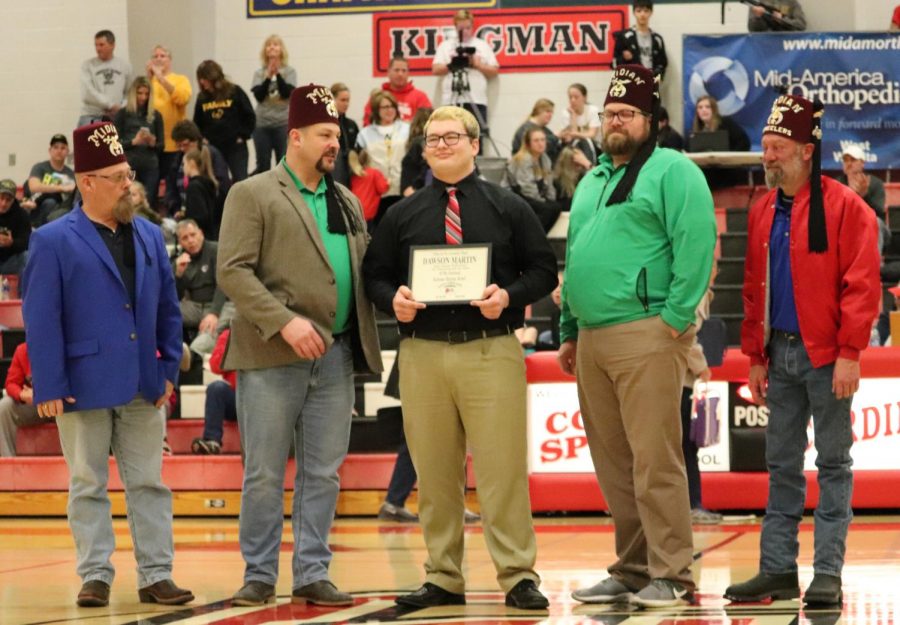 Senior Dawson Martin receives his Shrine Bowl certificate during halftime at the basketball game vs. Garden Plain Jan. 17. Martin will play in the Shrine Bowl on July 18 at Yager Stadium in Topeka.

Senior lineman Dawson Martin has been selected to play for the West in the 47th annual Kansas Shrine Bowl. This selection came after Martin averaged 2.9 tackles a game, helping the Cardinals to a 8-3 season record with a postseason Sectional exit.

“I was pretty surprised; I didn’t think I’d really get selected,” Martin said. “My parents were really excited, and I know the coaches were really happy for me too.”

Martin has played football all four years of his high school career and will play center at the Shrine Bowl, despite not playing the position all season.

“[I’m excited] to play and have a whole new experience,” Martin said.

The list of players making it to the Shrine Bowl is pretty exclusive, with only 80 selected, according to Martin. The Shrine Bowl will be held at Washburn University’s Yager Stadium in Topeka on July 18, kicking off at 7 p.m. All game proceeds will go towards the Shriners Hospitals for Children.

“I’m happy I get to participate in something that’s doing good,” Martin said.