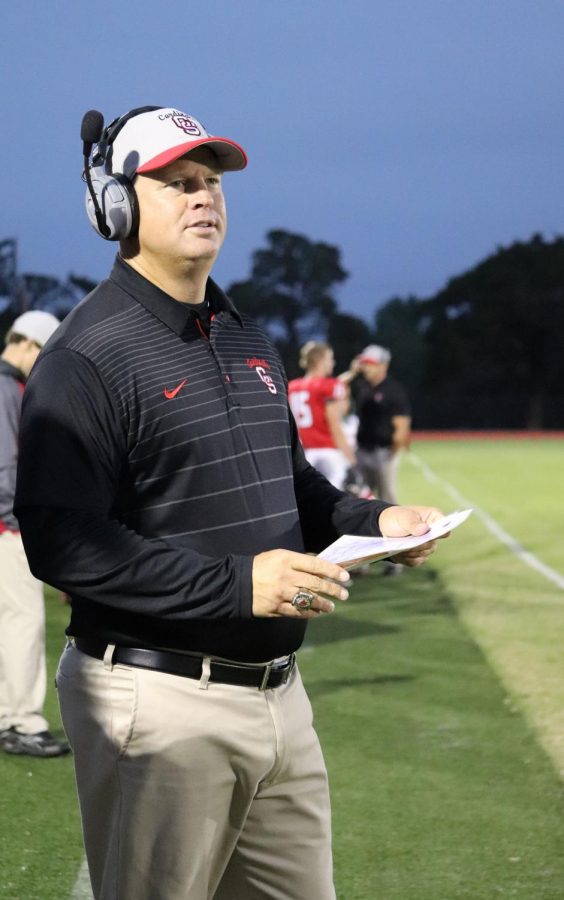 During the game against the Panthers Oct. 4, head coach Matt Biehler observes from the sidelines as the team closes in for a touchdown. This was Biehler’s most recent victory after reaching his 100th win as head coach of the Cardinals.

Sept. 27 marked the day football head coach Matt Biehler took his 100th win with the Cardinals. The boys played the Hutchinson Trinity Celtics, winning 43-8. Coach Biehler expressed his appreciation to be part of the team and have the support of Conway Springs by his side.

“I’m proud of the community and blessed because I have the support of the coaching staff, players and coaching administration,” he said. “I wanted to give back like my coaches did to me.”

Coach Biehler has been coaching Cardinal football since 1997 and during that time has gone to State with the team eight years, with two years as head coach.

“[The team] hasn’t changed much,” Coach Biehler said. “I still expect the players to work hard and be responsible.”

In the two games since this landmark win, the Cardinals won against the Independent Panthers 64-8 and the Remington Broncos 45-7, but Coach Biehler said he has his own goals for the team beyond the field.

“I just hope to make changes in players’ lives and get them ready to be adults,” he said.