FCCLA volunteers for Habitat for Humanity 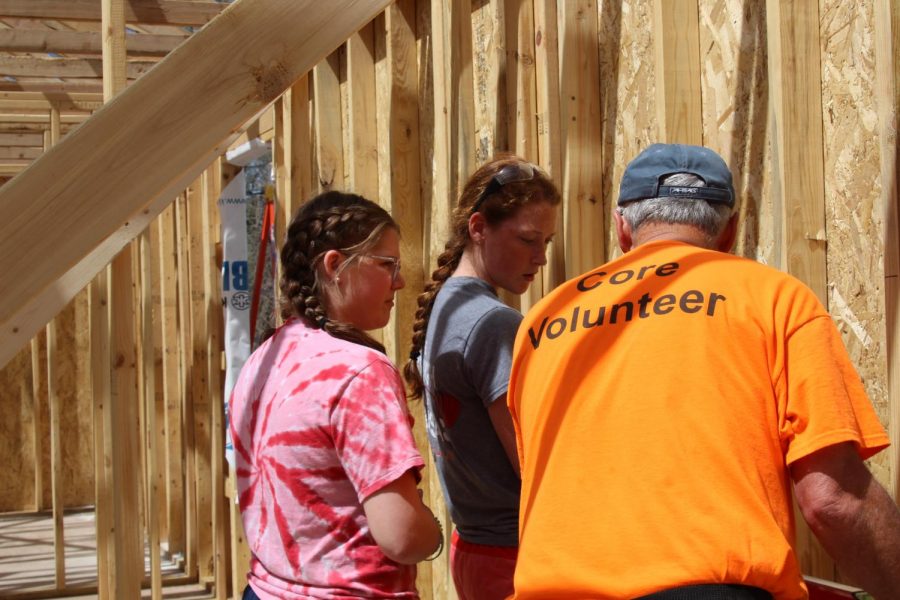 During the build, juniors Bailey Barkley and Madison Pauly assist a core volunteer with leveling. Throughout the day, high school volunteers assisted in tasks such as measuring, leveling, and nailing. “I almost stopped a fire from happening,” senior Leslie Mies said. “We were charging a battery, and it started smoking.”

On April 10, members of the FCCLA group traveled to Wichita to help with a Habitat for Humanity build. Students left before school and returned before the day was out. FCCLA took seven members to volunteer.

“I liked it because it was a new experience, and I think everyone should volunteer,” junior Bailey Barkley said.

While at the job site, the members split up in several different areas of work. Volunteers had the choice to work outside the house or inside and complete various tasks within their choice. For the high school volunteers, options were limited, though, as they could not use power tools or ladders over 6 feet unless 18 years old. This resulted in the majority of the members nailing in boards with hammers most of the day.

“The work was good,” senior Leslie Mies said. “They taught us everything we needed to know.”

FCCLA members came up with the idea to volunteer with the help of their sponsor, Nancy Julius. During a previous meeting, members discussed what projects they may want to do next. Julius listed ideas of things that the group has done in past years. One idea that stuck out to the members was volunteering for Habitat for Humanity. A vote was held, and the group officially chose that as their next, and final, project for the year.

“I felt happy that I just helped someone build their house,” junior Madison Pauly said. “I may not have done anything big, but I still felt good.”